Being a real estate agent and a small-time real estate investor, not only do I closely watch localized trends, but also pay attention to National trends. I pay attention to articles about things that can impact the housing market, and I try to interpret how they will trickle down to my local market. Lately I have began seeing comparisons of home prices at the peak of our last boom compared to now, as an analytical point to understand where we are in our “expansion” cycle.

The general consensus of these articles is that we are on par with home prices in 2007. However, there are a couple of sticking points with this train of thought in my opinion.

First, this does not take inflation into account. While it has only been 10 years; with an average inflation rate of about 2.25% over the past 10 years, current prices are (arguably) about 21.75% higher than prices in 2007 according to the Bureau of Labor Statistics Consumer Price Index. I would interpret that to mean that a $100,000 home in 2007 would be $122,000 today not considering other Market factors, which these other analyses are also not considering. All things being equal, this should mean that prices are about 22% less today than they were in 2007, (assuming actual dollar amounts are similar) and that’s a big number.

Second, it does not consider difference in interest rates. Speaking in generalities, 30 year rates are about a full point less today than they were in 2007. While 1% doesn’t seem like much, if you take an average sales price of around $350,000, that can equate to $3,500 is a year in interest at the beginning stages of a loan. That’s almost $300 a month.

Third, if history repeats itself, that would indicate that we are about halfway through our expansion cycle, not at the end of the supply cycle. Based on local indicators, this would seemed accurate. Supply is still low, construction is underway. Usually the phase that follows expansion is high supply or oversupply. While construction costs seem to be keeping construction rates at bay, it wouldn’t be far-fetched to believe that things could pick up substantially and create an oversupply in two years’ time. if we aren’t careful.

In short, I truly believe that while we will experience a housing adjustment in the future, (not necessarily the near future) but also that it will not be as deep or have as much impact as the historic, most recent recession. I also believe that a recession will be followed by a period of expansion, and the thought process will repeat itself time and again as it has in the past. Until then, I’ll continue to read articles about National trends and take them with a grain of salt, then come to my own conclusions based on facts, data, historic data and my own experience despite how accurate or inaccurate they may be. 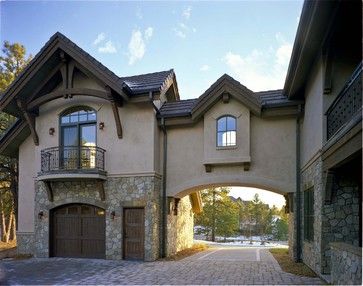 We don’t see a ton of stucco in this area, but have seen it installed in years past. It is also becoming a popular accent material. Also, it is a durable material that rarely needs refinished.
Stucco has, however, had it’s share of troubled times. In the 60’s and 70’s, a stucco system called the Exterior Insulation and Finish System, or EIFS, was introduced. EIFS can be a durable system, which as the name indicates, also offers an additional insualtion layer. Basically a foam board is installed followed by a netting, then stucco. In the late 80’s, lawsuits began to surface due to water intrusion. While little to no siding systems are impereable to moisture, the problem with EIFS then was that it did not allow moisture to escape which created mold and other problems.
Today, EIFS systems and manufacturers have drainage systems which can be installed to prevent problems if moisture becomes present. In addition, most manufactuers require that installers are trained and certified. Repair persons should also be certified by the manufacurer.
In addition to EIFS, traditional stucco is still installed today. Unlike EIFS which is a single layer of stucco (actually synthetic stucco) over the netting and foam board, traditional stucco is a 3 layer system consisting of aggregate, a binder, and water, much like concrete.
With all of the new construction we are seeing today, it is important that if installing stucco, and particularly EIFS, that it is done so by a certified installer. In addition, the certificate should be retained for future buyers as well as future repair or warranty work. It would also be a great idea to have your roofing, siding and decking contractors to have a preliminary meeting with the stucco installer. Any items that meet or cover stucco MUST be property flashed so that water is directed away from, or to proper areas so that the drainage systems mentioned above work properly. If the contractor is not local, you or your general contractor should also review potential problem areas for ice damming. Pay special attention to North facing roof valleys and discuss roof ventilation systems which help prevent ice damming, which is often a result of heat loss.