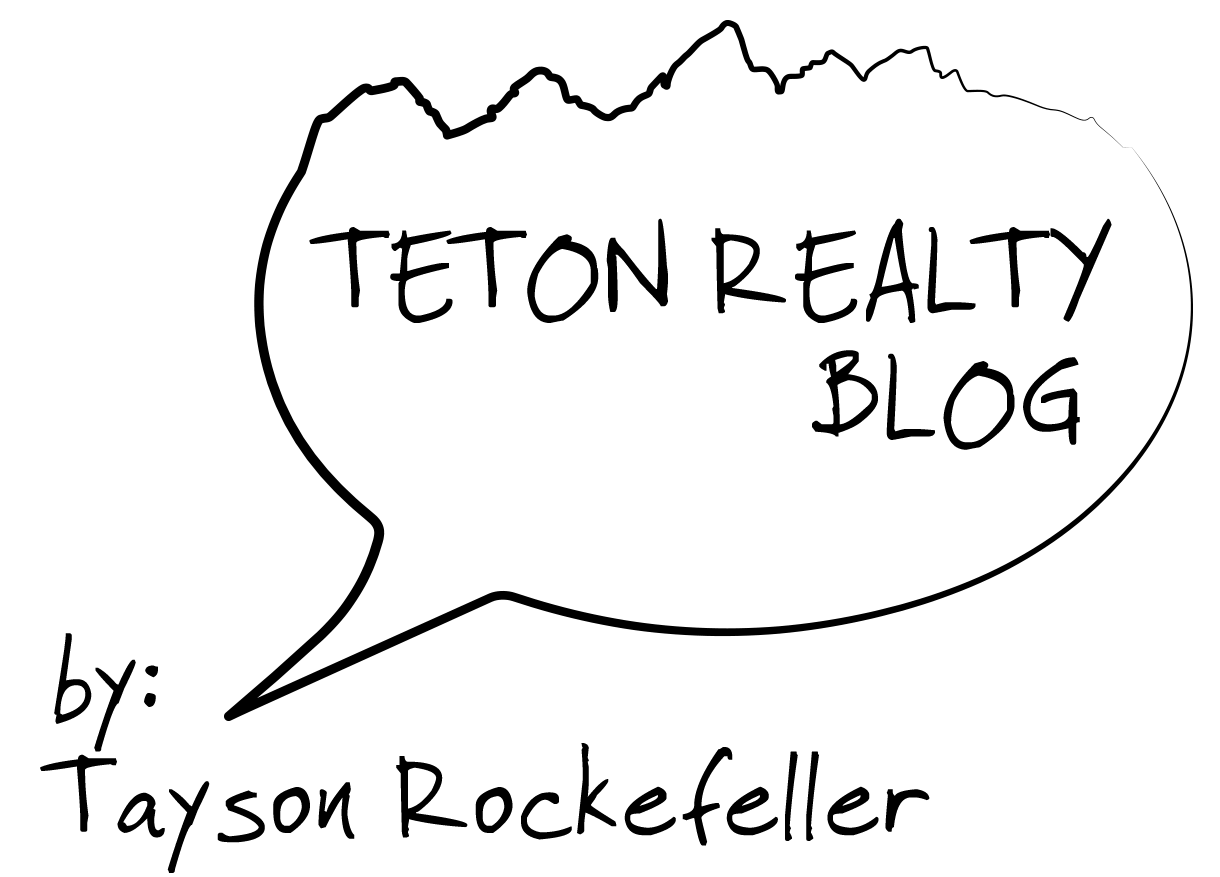 Welcome to the Teton Realty Blog. You will find the latest real estate happenings, and local information in the Teton Region.

You can stay up to date with the Teton MLS hot sheet. If you are interested in signing up for a real estate search portal, check out the link below for more information and a sign up sheet.

Check out the Search Bar to look for previous posts. Try "Property Taxes"

I’m not sure if it’s how busy things are or the increase in the number of land transactions equating to an increase of things I haven’t seen before, but I sure have seen an uptick of strange inspection findings. Over the course of my career, I’ve bumped into town parcels without connectivity to a sewer line, sinkholes because of buried cars, a number of buried fuel tanks, concerns over oil spills, hillside geotechnical concerns and more. As one might expect, I’ve also run the gamut with discussions on radon, bugs, covenants and restrictions, easements and so on. However, lately, I’ve even bumped into a few more. Bedrock preventing a typical septic install, extraordinary deep wells and artesian wells and springs are a few examples. One thing is for sure (although not as geographically interesting as Yellowstone), Teton Valley has some diverse terrain with nuances that one may not normally consider. I suppose it all depends on what one might be used to in terms of the nuances of their area, but even I would not have predicted bedrock in areas of the Teton Valley.

The above being said, it’s important to do your research. Remember that as agents, we are not experts in geography, terrain, practicing law, interpreting title and so forth. Real estate agents negotiate real estate transactions, and that includes negotiating due diligence and inspection periods for buyers to better understand and research the property they intend to buy.

Unfortunately, it’s almost impossible to plan for every situation that may arise when purchasing land with plans to build. One of the benefits (although not a guarantee) of purchasing a pre-existing home is the fact that many of the potential problems either did not arise, or have been resolved. Another tip to consider when buying land is purchasing in a subdivision. Although I have bumped into properties within subdivisions that still had special wetland requirements or septic problems, it’s less likely. With the growing demand for properties that are not in a subdivision, it’s important to also consider the fact that subdivisions have likely already been through a preliminary set of county or city required engineering reports, soil testing and so on.

The moral of the story, and the theme for many of my articles is; do your research!

In general, I have moved away from market updates when it comes to my real estate blog. We are moving those updates over to the brokerage. If you’d like to receive both, sign up on Teton Valley Realty’s website. I’ll always include the latest blog post. I want to try to keep all of the content for these posts relevant for as long as possible, and markets can change on a moment’s notice. This market update will definitely go down in the history books, so I think it’s appropriate.

The real estate market has remained surprisingly active. I seem to be working harder than ever – you know, when the going gets tough… as they say. I am doing a TON of videos and virtual tours, and surprisingly, have found pretty good success with “sight unseen” contracts. It definitely feels like the younger generation buyers have slowed and taken the issue with a little more concern. On the flip side, older generation buyers have ramped up with an increase in contacts, showings and contracts. I might be making this up, but to some degree, it makes sense. Younger generation buyers probably have more of our local tourism-related jobs, which have been hardest hit. The past several years of expansion have been great for almost everyone, but it would seem that the younger crowd probably hasn’t had as many opportunities to capitalize as those taking advantage of expanding markets and real estate values. On an interesting side note, the younger generation also seems to have a greater level of concern with respect to social distancing and being very careful about guidelines. This seems to contradict what we are hearing in the National news about younger people getting back to everyday life, or ignoring recommendations.

If you know me, I stay away from predictions. If I do make them, they are information-based, and never definitive. That being said, I’m going to guess we are going to see a continuous stream of people hoping to move away from populated areas and into rural America. If it were me, this is the first place I would look. I have read National Real Estate resource predictions of home values dropping 2-4% if things get back to “normal” soon, and 5-6% if things move slower in terms of recovery. I predict that it is less likely that rural areas will see contraction, but if they do, it will be further down the road – probably months after urban areas see an impact.

Back in July, I started to write an article about virtual tours. I do this frequently, losing interest in the article or saving it in my inbox for another day, probably part of the reason why I always have 50 or more emails in my inbox.

I started thinking about the article again in the midst of the current covid-19 virus. Back when I first started thinking about this, the gist of my article was that while I felt virtual tours could help in many cases, they can also hurt. Virtual tours, high quality photographs, drone footage and even videos can be deceiving. As a seller, I might be concerned that someone may not like my home before they even have a chance to see it. As an agent, I want to showcase the great qualities of a listing that I represent, and when possible, I prefer to do that in person. If you know me, you know that I am not, by any stretch of the word, a pushy salesman. I like to think that I point out good qualities, and try to be proactive about finding ways to work around problems for my listings. I also try to recognize when a potential buyer just isn’t interested in a property, and do my best to find something suitable. More than anything, though, I like meeting people. I like shaking hands, and I like getting to know potential clients as we hit the road to explore the beautiful Teton region.

The above being said, I’m curious to see how the current situation will shape the future of the home-buying process. I think, and hope, that things get back to normal. But I also think that our world is changing. Fortunately, I have a pretty good handle on most of the technology available today. We use a number of tools within the brokerage that help us streamline our transactions and processes. I still think that there’s going to be value and bigger demand for virtual tours and videos, but I also think we’re going to have to be careful about how we present media. Sellers are going to rely on us to sell their property, and buyers are going to rely on us to make travel plans to come look at one piece of property, in many cases across the United States or from another country. I believe there is going to be an ever-evolving balance between accurately expressing real estate through virtual media and doing our best to properly represent all of our customers and clients.

The county is currently working through a land development code update. They have drafted an initial code, and are currently in the stages of the public review and comment for the draft code. There are some big proposed changes, but what do they mean?

Teton County’s comprehensive plan, zoning, land use and development codes can be a lot to understand. I often have to find ways to articulate information and provide data in an efficient way without being overbearing, similar to situations when I am working with a first-time home buyer. I’m going to try to explain the new proposed zoning changes in this article, saving the development and code changes for another day.

WHAT IS IT NOW?

The County (not City limits) is currently made up of two main types of zoning, A-2.5 and A-20 zones. Most of the areas South of Victor and North or East of State Highway 33 are A-2.5, and most everything else (save for a few areas along the foothills) is A-20. It’s roughly 50-50. What does that mean? It’s pretty simple. A-2.5 has a minimum density requirement of one house & guest house per 2.5 acres, and A-20 is 20 acres. There are a few other zoning categories, mostly related to industrial and commercial use.

Aside from the commercial zones, there are five new zoning types proposed. Keeping in mind that the number represents the minimum density requirement per residence, they are as follows: A “Rural Agriculture” 35 acre zone replaces most of what used to be the A-20. A second 35 acre “Wetland” zone is similar, presumably with stricter development guidelines due to its location within wetland areas, mostly in the watershed East of the Teton River. A “Foothill” 10-acre zone encompasses most of the surrounding foothills, which would take the place of the previous 2.5 acres zone in many areas. A rural neighborhood 20 acres zone is built around the areas East of Driggs to accommodate future development, and finally, the highest density zone is a “Rural Neighborhood” 5 acre zone that would encompass the Fox Creek area between Victor and Driggs and the Hastings Lane are between Driggs and Tetonia, both mostly limited to areas East of State Highway 33.

WHAT DOES IT MEAN? This is largely up to interpretation and debate. Unfortunately, it will likely turn into a political debate, but that’s not my purpose here. My interpretation is that it is clear that the density requirements are going to go WAY down. In other words, there will be fewer homes per acre. It will likely decrease the supply of land over time, and increase demand. In theory, this could increase property values in the distant future as existing land is absorbed. At the same token, it will make it challenging for newcomers to the area looking for affordable land. As a property owner, I see both the upside and downside. I do not own any large farm tracts so I am not affected by land development challenges. I also feel that many of our building sites are more affordable than they should be, considering the recreational market status of our community. However, that is mostly attributed to the perception of oversupply (and construction costs), which I have discussed in previous articles, and will discuss further in future ones.